Boon Folk is the product of several things:

The warm bodies on stage and behind the mics are Suzanne and James Boon: equal partners in marriage, music and life.

Suzanne is a Canadian champion highland dancer, student of karate and the founder of the Carer Support Team for the Children’s ward at Watford hospital.  Born on the west coast of Canada she has lived in Britain more than half her life.  Her voice is a critical element of the Boon Folk sound, and her naturally crafted vocal parts leave room for improvisation.

James is a PhD laser physicist and a black belt in karate.  He provides fingerstyle guitar and voice.  James was instilled with a passion for music by being made to mouth along to the words without making a sound at school.  Some people respond best to positive encouragement; James is of the school that finds more than enough incentive in being told they cannot do something.

Suzanne and James met and fell in love at St Andrews University.  At that time Suzanne would often break into song for no particular reason, and while James played guitar and even wrote a song for Suzanne, it was subjected to the ridicule it deserved.  With hindsight, the raw materials were present, but the first stirrings of the Boon Folk were not felt in those early days.

After St Andrews, came York and then London.  By this time Suzanne and James were engaged.  The idea to make music together started with a song about a squirrel.  It was a silly song: “There’s a squirrel in my garden, a squirrel in my yard…”, but with Suzanne’s voice the word song could be added to the word silly (as in, before it was just silly), and a seed was firmly planted in James’ brain.

You can make great music on your own, but there is something special about a collective effort; like the moment after an orchestra stops tuning up and begins to play in perfect synchronicity.  The collective effort of the Boon Folk is aimed at trying to make the voices of James and Suzanne work like the guitar line-up of the Rolling Stones.  As Keith Richards once said:

“For me, playing a guitar is like the ancient art of weaving. It’s about more than one player. At our best, me and Ronnie make the Bayeux Tapestry onstage.”

That is the sound the Boon Folk are trying to create with their voices.  A tapestry in which you cannot tell one from the other and it does not matter.  It’s not about being flashy. It’s not about one thing standing out and saying hey look at me.  It’s about the sound.

Songs are like tomatoes.  They grow from a seed in the right conditions.  If all is well it does its thing and gets bigger.  At some point it starts to look like an actual tomato (or song as the case may be) and the time comes to pick it and give it to someone to eat (listen to).

James starts with a guitar line, a vocal melody or an idea, and Suzanne adds harmonies.  The songs have grown and changed over time: words, melody and accompaniment.  Nothing is static.  The recorded tracks are snapshots.  No one element is more important than any other.  The goal is to convey an idea or a feeling: something that someone might connect with. 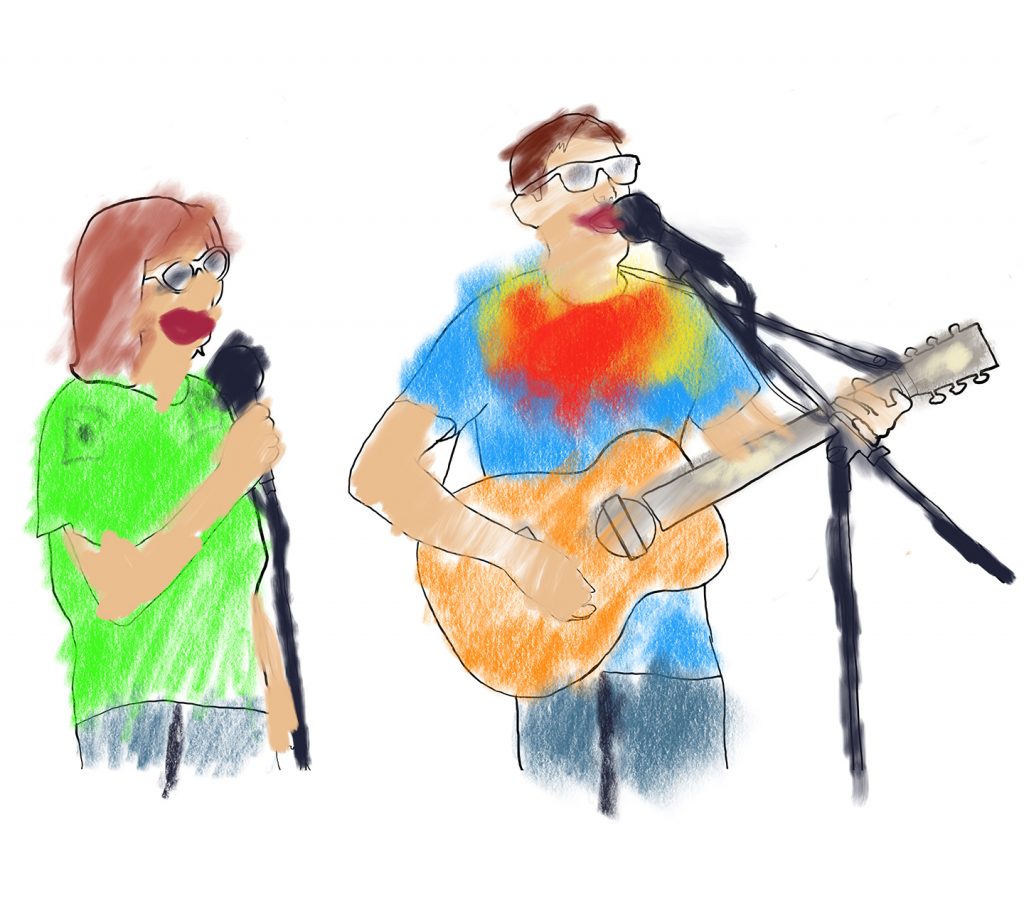 Iris is a friend, a singer and a vocal coach to the Boon Folk.  She has an amazing musical brain and is a wonderful teacher.  Her support has allowed James and Suzanne to experience and understand music in new ways.  With her guidance they have been able to channel their creative impulses into what has become Boon Folk.

Musical influences are like stops on a train line.  Each station represents a beloved artist from one genre or another.

If you speak to James or Suzanne one-to-one you might get the sense of different musical directions they each might travel if left to their own devices.  Suzanne drifting toward country perhaps and James plugging in and turning the amplifiers up to 11.  Together – the train has a life of its own.  It wants to go somewhere and there is no resisting, not that Suzanne and James would wish to.  It is not the lowest common denominator in their musical tastes; it is something slightly new.  Like a child, it came into their lives one day rather suddenly and has grown.  It has developed a personality of its own and is not entirely within their control (if at all).  Who would want it any other way?

So who and what are Boon Folk?

Transatlantic singer songwriters.  We can be sure about that much, as it is literally true.  They are a couple with origins spanning the Atlantic, but are they folk?  Well, we’re all folk aren’t we?  But do they sound folk?  Well have a listen and tell them what you think.


Warning: count(): Parameter must be an array or an object that implements Countable in /homepages/33/d532215343/htdocs/stageserver/boonfolk/wp-includes/class-wp-comment-query.php on line 405